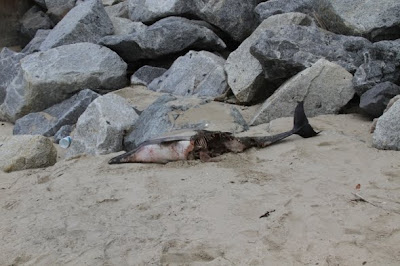 The wound pattern opened up the question about it's attacker(s) and a running debate is now unfolding between two camps who are championing:

“It’s a predation kill, most likely by a great white shark,” Dave Janiger, a curatorial assistant in the mammalogy department of the Los Angeles County Natural History Museum.

The main question is timing. Do we even have Carcharodon carcharias off Redondo beach in March large enough to make a successful predation on an animal this big?

Seals in August and September have washed up in the same location without heads in previous years and that's fits with migration profiles.

So, was this the work of an overlarge Isurus oxyrinchus perhaps?