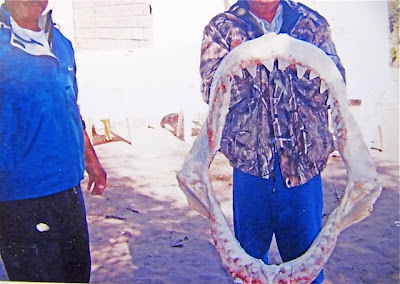 Pete Thomas is reporting another massive white shark taken in the Sea of Cortez this week, leaving many within the shark community asking, "what's going on?"


From the looks of things we would estimate this animal to be at least 15 feet long at the time of capture perhaps even larger making this another titan of the region and another great loss to breeding stocks.

Laguna Beach, CA (April 25, 2012) – After returning from a trip to Loreto, Erik Cutter,  Managing Director of EnviroIngenuity, reported gruesome stories about the killing of numerous Great White Sharks off Isla Ildefonso an island located just north of Loreto, Baja California Sur, Mexico. Isla Ildefonso is about 40 miles north of Loreto, six miles north of Punta Pulpito and east of Bahia Concepcion at 26°38'N, 111°26'W. It is a steep and barren island and it is known for big fish, large pelagics and untouched dive sites.

"Commercial fishing has become so difficult in the Sea of Cortez that several of the few remaining commercial fisherman are so desperate that they are now targeting the ocean’s greatest predator, the Great White Shark," he said. "According to a very reliable source, at least thirteen mature Great Whites between 16 and 22 feet long, some estimated to weigh more than 2, 200 pounds, are being slaughtered for their fins and their jaws."

Cutter is also publisher of Baja Life Magazine and an avid fisherman for over 35 years in Baja California. He learned that the sharks are baited with a large dead fish such as a yellowtail with barrels attached so that the shark eventually drowns. Once they retrieve the shark, some of which are still barely alive, they are beaten to death with a bat, then finned and carved up for their jaws. The jaws reportedly fetch $1,500 each and are being sold by the local fisherman.

“The economic reasons are obvious, but certainly, they don’t justify the indiscriminate and illegal killing of these amazing sharks,” said Cutter. “I am very upset by this because I have worked for many years to educate local fisherman to protect their fishery, one that Jacques Cousteau once called, ‘The Aquarium of the World’."

The Loreto-based non-profit, Eco-Alianza Loreto, also encourages local fisherman and teaches youth to protect what they have left of their critical marine resources. Unfortunately, lack of enforcement by federal officials and the poor economy are driving fisherman to this destructive extreme.