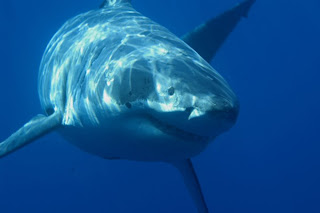 One of the better looks at this entirely sad event on Solana Beach this morning comes from the Daily Green Blog.

What is believed to be a great white shark attacked and killed a 66-year-old swimmer off Solana Beach, San Diego Friday, leading to a beach closure, mourning among friends and relatives, and rampant media attention.

Such fatal attacks have been relatively rare.

A single swimmer in the South Pacific was the only person to die from a shark attack in 2007, but total shark attacks rose nearly 13% over 2006, according to statistics released in February by Florida Museum of Natural History at the University of Florida.

“It’s quite spectacular that for the hundreds of millions of people worldwide spending hundreds of millions of hours in the water in activities that are often very provocative to sharks, such as surfing, there is only one incident resulting in a fatality,” the lead author, George Burgess, said at the time. “The danger of a shark attack stays in the forefront of our psyches because of it being drilled into our brain for the last 30 years by the popular media, movies, books and television, but in reality the chances of dying from one are infinitesimal.”

The number of shark attacks overall increased from 63 in 2006 to 71 in 2007, a nearly 13% increase, continuing a gradual upswing during the past four years.

“One would expect there to be more shark attacks each year than the previous year simply because there are more people entering the water,” Burgess said. “For baby boomers and earlier generations, going to the beach was basically an exercise in working on your suntan where a swim often meant a quick dunking. Today people are engaged in surfing, diving, boogie boarding and other aquatic activities that put them much closer to sharks.”

Within Florida, Volusia County continued its dubious distinction as the world’s shark bite capital with 17 incidents, its highest yearly total since 2002, Burgess said. Attractive waves off New Smyrna Beach on the central Atlantic coast are popular with surfers, he said.

Elsewhere, there were 12 attacks in Australia, up from seven in 2006 and 10 in 2005, but down slightly from the 13 attacks recorded in 2004. There were two attacks each last year in South Africa and New Caledonia, with single incidents reported in Fiji, Ecuador, Mexico and New Zealand.

Most of those attacked (56%) were surfers and windsurfers, followed by swimmers and waders (38%) and divers and snorkelers (6%). The one 2007 fatality was a snorkeler from France visiting the Loyalty Islands archipelago in French New Caledonia.

“We advise not getting yourself isolated because there is safety in numbers,” Burgess said. “Sharks, like all predators, tend to go after solitary individuals, the weak and the infirm, and are less likely to attack people or fish in groups.”

Wow, amazing insight... just wanted to drop by and see what you had to say about the very sad shart attack yesterday.
:) twotank