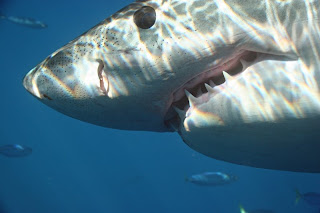 At 8.00am this morning we started getting calls from the media for comment. Expect an unfortunate result for the sharks coming from this as the media spins this entirely sad event up.

Most of the reporters/assignment producers who contacted us were looking for anti-shark quotes. We politely refused. Our sympathies go out to the family of the swimmer.

Check back for updates.

SOLANA BEACH, Calif. (AP) — A shark on Friday attacked and killed a swimmer who was training in the ocean off San Diego County with a group of triathletes, authorities said.

A man between 55 and 60 years old was swimming at Tide Beach around 7 a.m. when he was attacked, according to a statement on the Solana Beach city Web site.

The man, whose identity was not immediately released, was taken to a lifeguard station for emergency treatment but was pronounced dead at the scene, the statement said.

Swimmers were ordered out of the water for a 17-mile stretch around the attack site and county authorities sent up helicopters to scan the waters for the shark.

"The shark is still in the area. We're sure of that," Mayor Joe Kellejian said.

It was unknown what kind of shark was involved.

Shark attacks are extremely rare. There were 71 confirmed unprovoked cases worldwide last year, up from 63 in 2006, according to the University of Florida. Only one 2007 attack, in the South Pacific, was fatal.

The last fatal shark attack in California, according to data from the state Department of Fish and Game, took place in 2004, when a man skin diving for abalone was attacked by a great white shark off the coast of Mendocino County.

Posted by Horizon Charters Guadalupe Cage Diving at 11:08 AM