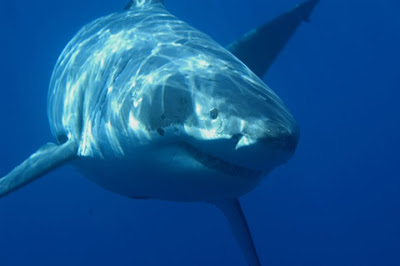 It's tough having a job that takes you away to the US Virgin Islands for a "site inspection", but that's where we have been for the past 7 days. Our email is filled with a heap o' shark stories we need to cover.

Scientists now know exactly how much time each shark spends waiting for takeaways at Seal Island. Long considered a mysterious monster from the deep, the great white shark is actually from the shallow — and no longer all that mysterious.

That’s according to a group of pioneering researchers who, using sophisticated electronic tracking equipment, have compiled the first-ever detailed swim-maps of several great white sharks in Mossel Bay.

So far this year five sharks — Zulu, Kiddo, Pasella, Roxanne and Sampla — have been fitted with electronic tags that show not only the shark’s position, but also its depth and the surrounding water temperature.

Posted by Horizon Charters Guadalupe Cage Diving at 6:29 AM