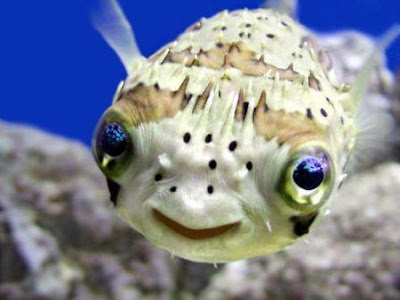 O.K, so we just finished a post about why direct action campaigns against cultural food items are most often ineffective.

Then there's the curious case of this food item which, by the looks of things, is allowing the blowfish population off the coast of Japan to remain intact:

Blowfish testicles have left seven Japanese ill, one critically, renewing public fears over the dangerous delicacy.The group ate raw meat and baked testes of blowfish - known in Japan as fugu - at an upscale restaurant on Monday in Tsuruoka, an old castle town 350 kilometres north of Tokyo.

They were treated at a hospital for numbness in the hands and legs and other symptoms. One of them was in a critical condition yesterday.

Posted by Horizon Charters Guadalupe Cage Diving at 11:17 AM