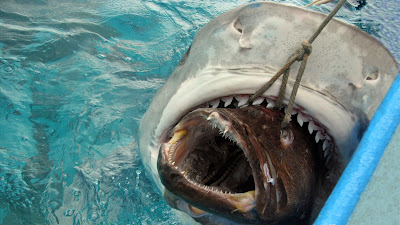 "NIMBY" is an acronym used by the Pentagon during the height of our mis-adventures in Iraq. It's stands for "not in my backyard", and what, you may ask does this have to do with shark diving?

These scripts are typically produced by non shark people and attempt to bend sharks into the script, not work with the animals as the operators know them. This particular shows script has made the rounds within the industry and has been denounced by everyone who has seen it.

Here is the complete post from Beqa's blog this week.

This is also "Da Sharks" personal take on the industry as a whole. "NIMBY" also stands for industry leadership in this case. As operators we have become the unwitting gate keepers for the ongoing perception of sharks. In the final summation it is up to us to look at our dive sites less as Biological ATM Machines and more as complete shark sanctuaries.

We're all in this together.

I refuse to believe that the Channels cannot treat predatory Sharks in the very same way they have finally learned to treat the terrestrial apex Predators: as iconic, endangered, fascinating and essential elements of their habitats. It obviously works commercially or they wouldn't be airing those shows - Right?

Fiji would have some wonderful Shark stories to tell, combining huge Sharks with grassroots Conservation and ancestral beliefs, all set against the magical backdrop of the South Pacific - it sure wouldn't take a rocket scientist to weave that into a fascinating narrative.

But alas, all we get is more requests for the same, tired, endlessly re-hashed garbage.
How does that dovetail with the new green image those guys are trying to portray?

about time someone said something about this kind of programming!