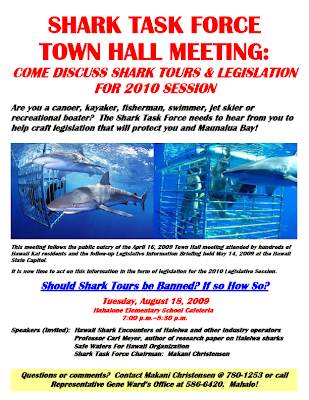 This is the actual promotional flyer put out by Rep Gene Wards office in Hawaii this week.

It is one sided, anti-tourism, anti-shark diving and designed for one purpose only - to inflame an already angry populace (click image).

"Should Shark Tours be banned? If so How so?"

This is not the face of balanced tourism discussions. This is political theater, stoking an already angry mob to further anger and distrust of two operations in Hawaii that have been on the forefront of shark tourism in the region for the past 10 years.

Rep Ward is a savvy politician, like recent health care town hall debates across the country he knows what buttons to push and how to work the crowd. The people he has brought to these town hall meetings he is calling "his constituents," hoping to use their anger as justification and a shield for killing shark tourism in Hawaii.

Unfortunately the anti-shark diving sentiment being raised by Rep Wards efforts and staff has gone past coherent discussion and is now a full fledged witch hunt of epic proportions. In the long multi-million dollar history of tourism in Hawaii no single politician has gone after small business owners with this kind of directed public anger and mistrust. Using the fear of sharks three nautical miles off the mainland as his "wedge issue".

All is not lost.

The industry has seen this kind of effort before. A quick look into Rep Gene Wards political career shows a politician who sees tourism vision for Hawaii, as in his support for Spaceports on the islands.

We're pretty sure Rep Ward is not completely anti-tourism, as he is presiding over the worst tourism economy in the past 40 years with Hawaii suffering a 25% loss in revenues since 2008.

What is needed in Hawaii right now is rational discussion not political theatre. Meetings with officials and operators to define shark tourism in Hawaii and abide by hard and fast rules and regulations that keep 10,000 shark diving tourists coming back to Hawaiian waters year after year.
Posted by Horizon Charters Guadalupe Cage Diving at 2:00 PM

This flyer is amazing. How is it Rep Ward is using public funds to kill business in Hawaii?

I have been in tourism for the past 33 years and I have never seen anything like this from a politician...ever.

Everything about that particular flyer is stacked against the operators.

"Should Shark Tours be banned? If so How so?"

As a dive shop owner this is as bad as it gets when politico's create mobs to attack businesses.

I have been watching your coverage of this since the story first broke many months ago.

It seems one politician in Hawaii is trying to destroy tourism for election gain.

After the Meyer study he should have stepped back a bit.

Republicans hate tourism in any form. National Parks, Reserves, you name it they hate on it.

Using sharks to frighten locals is a sham and he knows it.

Take him out for a trip and see what he thinks.

Online Marketing of your brand