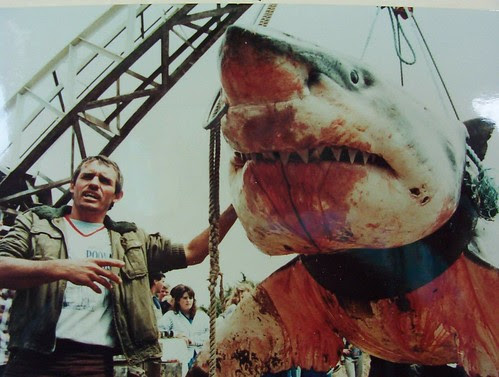 In case you did not know who Vic Hislop was, he's featured this month in Edit International magazine which poses the question "Are Sharks Targeting Humans?"

"When people put down shark cages for their thrill-seeking clients some of the burley (blood and cut up fish bait and meat) travels up to 40 kilometers away, say Hislop. These people would like you to think they are conservationists because they don’t kill sharks – but they are using thousands of edible fish as shark bait. He adds, Sharks pick up the scent, become aroused and are ready to eat by the time they reach the cage containing a human. If the cages were not strongly made, or fell off to the bottom, those stupid people would be goners in seconds. Meanwhile the sharks are not killed after the event. They are simply being trained to hunt humans.”

Editors Note: It is media quotes like these we are reminded of the commercial shark divers prayer - "Lord protect us from the small minded and the dim."

Vic has always been an idiot to me and will be as long as he spreads his unscientific views that a good shark is a dead shark.Some people change, but he is proof some don't. It was nice to see Frank Mundus become a supporter of conservation in his latter years, too bad Vic hasn't. Yes, Lord protect us from guys like this, we don't worry about the Sharks!

I tried to get through the entire Edit International interview, but I felt like I was becoming less intelligent, the more I read. I wonder if the scores of people who drown in lakes and swimming pools are also shark attack victims, in Hislop's mind.

Hence our prayer at the end of that piece.

Someone needs to drop him into the water with a bunch of reef sharks with no weapons to see that sharks are not out to eat humans any chance they get. Though he probably still would never understand or most importantly care.