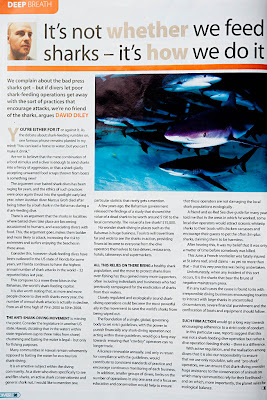 David Diley is one of those people.

A man who has looked at the global shark diving industry and who has distilled it's biggest issue down to a well thought Op Ed.

We would like to congratulate him on his ideas this month and fearless interpretation of our industries future and direction.

This blog along with a few others have been advocating for deep changes within our industry. One year later it would seem that we're having an effect.

As we close out 2009 and a decade that has seen shark diving grow from a few pioneers and into a global 300 million dollar tourism juggernaut it is time to streamline and manage this industry.

The scuba industry did it and most other high profile tourism industries have done the same.

Make no bones about it, commercial shark diving is not scuba diving and it never was, therefore it is up to our industry to guide and direct it's own future.

With 2010 right around the corner the fusion of a commercial shark diving guiding body along with shark conservation would be a powerful force to content with, and would go a long way to growing this industry into 2020 and beyond.

Solid vision for the future and thinkers like David Diley will get us there.

Thanks to Da Shark for the original post.
Posted by Horizon Charters Guadalupe Cage Diving at 2:28 PM