Protect the Sharks of the Bahamas - BNT Push 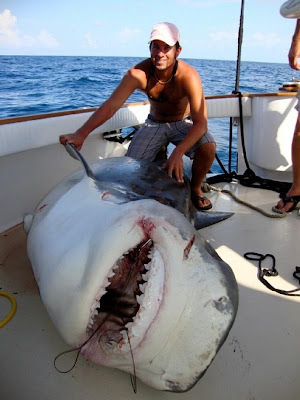 The Bahamas National Trust formally launched a local shark conservation campaign Tuesday, aimed at pushing the government to create comprehensive regulations to protect the sharks of The Bahamas.

It’s an effort that carries with it a certain sense of urgency, now that The Bahamas is one of only a few locations around the world that can boast of healthy shark populations.

"Right now when you read through the Bahamian fisheries law, even if you would do a search for the word ‘shark’ you wouldn’t find anything,” noted Jill Hepp, manger, Global Shark Conservation, Pew Environment Group, which is working with the BNT on the “Protect the Sharks of the Bahamas” campaign. “You’re starting from a situation where there’s nothing specifically on the books that would prohibit or restrict or manage the shark populations here.”

While sharks are in trouble globally the state of shark populations here are among the best in the world, according to researchers. The relative health of the shark populations in The Bahamas has been attributed to the country’s ban on long-line fishing in the 1990s — combined with the fact that there is no incentive for local fishermen to sell shark meat. Now, shark researchers and conservationists want to make sure that the healthy shark populations in Bahamian waters stay that way.