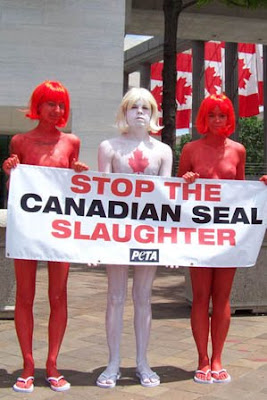 The announcement of a new multi-million dollar trade agreement between Canada and China has set the seal conservation world ablaze.

For those of us a bit more left of center, this trade agreement is nothing new, and the main reason why many of "save the" campaigns ultimately fail.

While we're sure these fine ladies of PETA mean well, what they are doing here does not affect trade between nations. In fact all direct action seems to accomplish these days is in securing shows on Discovery Networks.

These shows are all but guaranteed to run 20-30 seasons of "saving the" with some colorful moments for audiences to watch. But at the end of the day markets are won and lost by trade agreements and even the top tier "save the" campaigns are at the whim of new trade agreements forged in desperation, or in multi-year packages.

As was the case recently in Canada.

Case in point Alibaba.com. Once the most egregious online platform for the sale and trade of shark fin, a global campaign to shut down this online trade was ultimately successful.

Today there are 5-8 online trade platforms that trade the same volume of shark fins. An eye opener for us when these sites were discovered, and a clear line of attack for conservation groups looking to effect change.

Go after the trade.

The debate about sustainable harvests with seals will go on forever, as apparently will the trade in seal meat and furs, to be recycled in China and sold back to us in the form of fur lined boots and premium dog food no doubt.

The end users of trade are the most vulnerable and usually have the most to lose. The folks on the front lines, the guys with the Hakapiks on ice flows in Canada make nice media targets but at the end of the day have the least to lose, because they are starting with little to begin with. Same goes for the shark finners in Mozambique, or the folks in Latin America coming in with tons of sharks fin on second and third rate fishing boats, selling their fins for a dollar a pound.

Change can come, and ultimately conservation groups can be successful, but the days of staged multi-million dollar media extravaganzas on television, small protests with semi naked protesters, and the endless cycle of online petitions has to end.

Trade agreements between nations trump everything and right now very few NGO's have a seat at the table when it comes to changing trade agreements.

It's a race everyone involved in "save the" campaigns can ill afford to lose.
Posted by Horizon Charters Guadalupe Cage Diving at 10:29 AM