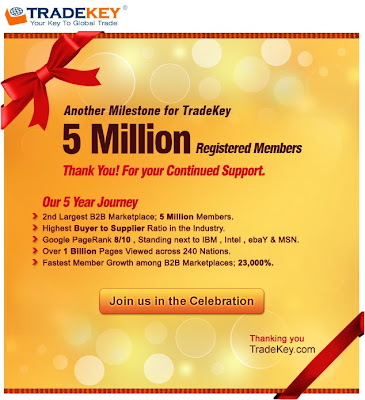 TradeKey.com, the second largest B2B online trading marketplace on the planet is celebrating, and this week we received an invitation to join the online sales of...dried sharks fin.

We have been tracking the online sales of dried and fresh shark fin after Alibaba.com stopped selling all shark fin in 2008.

At the time Alibaba.com was the single largest purveyor of shark fin on the Internet. Moving thousands of tons of shark fin each month.

The results from our tracking are not good, and trade continues unabated on several sites like TradeKey.com and others.

While TradeKey.com celebrates 5 million registered users this week, shark fin traders from around the world have another reason to celebrate as shark fin from Morocco, New Zealand, and Oman make their way to waiting international markets.

Anyone up for round two?
Posted by Horizon Charters Guadalupe Cage Diving at 6:58 PM