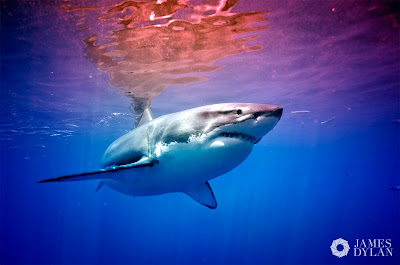 16 passengers and a crew full of shark men (and women) set off on a 5 day journey of a life time and got a life time worth of White Sharks in just 8 hours!

As the sun sets over the hunched back of Guadalupe Island the prime rib is exiting the oven bound for a hot date with some happy folks.

A saxophone is caressing the air played by a passenger on the top deck. Others exchange experiences over a ice cold beer in lounge chairs on the back deck. After our arrival here at 4AM people began to stir in their cabins. Cages were in the water as the sun peaked up out of the big blue Pacific.

After breakfast everyone had a rotation in the cage to shake off the cob webs; it was game time. Enter Carcharodon carcharias (Great White Shark). For the next eight hours it was breath taking. Over twelve different sharks made an appearance on day one of the 2012 shark season.

At times they came within inches of the cages.

Here's my left side and then my right side, as if the sharks were putting on a show for our viewing pleasure. We saw so many sharks today my voice is shot from yelling WHITE SHARK so much. The afternoon it was even crazier. There were times when people would come out of the water saying they were seeing 3-4 sharks at a time!!!

What an epic day aboard the good ship Horizon.

As I walk through the laptop filled salon, divers share their epic day with photos. Pictures and movies of sharks up close, sharks in the back ground of divers, and of course smiling the whole time. No words can explain what just happened here at this magical island in the middle of the Pacific ocean.

I can't wait to see what day two has to offer.

About Shark Diver. As a global leader in commercial shark diving and conservation initiatives Shark Diver has spent the past decade engaged for sharks around the world. Our blog highlights all aspects of both of these dynamic and shifting worlds. You can reach us directly at sharkcrew@gmail.com.
Posted by Horizon Charters Guadalupe Cage Diving at 9:11 PM

Beautiful!...the island, the sharks, but to hear it from u and the good ship Horizonon on top of it makes my heart sing! One of these days soon i will find myself back out there again, sure have missed u, get your wetsuit on and give those sharks a kiss fir me for ol' times sake!

Its Gina!...Beautiful blog...the island, the sharks, but to hear it from you and the good ship Horizon makes my heart sing! One of these days soon i will have to find my way back out out there, put on your wetsuit get in therr and give those sharks a kiss fir me will u!