Can One University Student Save Sharks?

The idea of shark conservation has been around for many years but are we winning?. Shark finning seems to keep going, despite efforts to ban it. Poachers catch sharks illegally and few countries have the will or means to enforce their own protection laws for sharks.

Don't get me wrong great strides have been made to protect sharks over the years but I get the nagging feeling we're not quite there yet.

Of course we do, but will that solve the problem? What can we as individuals do? 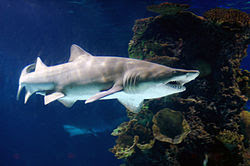 Chelsea Stephens, a student at the University of Rhode Island came up with an novel idea made with 49cents worth of pvc pipe.

She developed a "hook-blocker", a device that reduces the chances of a Sand Tiger Shark, a protected and rapidly declining species, getting gut hooked and dying.

The device is a simple pvc pipe attached to the fishing line about 7 inches above the hook, preventing Sand Tiger from swallowing baited hooks.

In my view, that's how to do conservation. Real world and immediate solutions that save sharks now.

It's frustrating sometimes to look at the big conservation picture and intuit progress, but if we look at many small and regional things that we can change, we can all make a difference.

At first I thought, why do they have to wait 2 years?

But after a little reflection I realized that even though it's just a small step, and those state dinners don't exactly use a lot of shark fins, it signals a change in attitude. Maybe if the government stops serving shark fin soup, then the people will follow suit and stop serving it at weddings and little by little, the demand for shark fins will get smaller.

I guess I am old school when I believe that many small, smart conservation efforts can actually lead to big changes for sharks. Chelsea Stephens showed us how, with a piece of pvc pipe and an imagination, you can be part of the progress.


About Shark Diver. As a global leader in commercial shark diving and conservation initiatives Shark Diver has spent the past decade engaged for sharks around the world. Our blog highlights all aspects of both of these dynamic and shifting worlds. You can reach us directly at sharkcrew@gmail.com.
Posted by Martin Graf at 12:17 PM