How is Guadalupe this season?

Our 2013 white shark season has been incredible so far and our divers are coming back excited. This is a trip report we just received from Robert Saipe.


It’s been 2 weeks since we docked after an amazing adventure at Isla Guadalupe, but, each day, I still find more joy as I think about the experience that Shark Diver delivered.  When I booked my trip, all I really hoped for was a chance to see even one Great White up nice and close but from safety.  Who knew I’d come away with so much more?  I’ll try to relay the basics of my experience through these passages, but I know words can’t fully express how deeply thankful I am for meeting our Guadalupe friends! 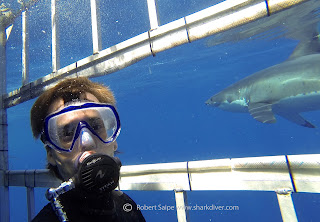 The crew at Shark Diver really are the best.  Most people probably hope for great dives when they book, but I have to tell you that vacation time outside of the dives was wonderful too.  The crew, at all times, exemplified the words ‘professional’ and ‘caring’.  For me, the fun never stopped.  When I was in the water, I saw amazing sharks.  When I was out of the cages, I shared countless laughs and stories with crew and other divers.  I particularly enjoyed the evening chats with the crew.  It’s something special to know that, while the crew worked super hard for us, they were courteous, caring, fun, and, most importantly, ‘real’.  I never felt like I was in the company of staff who were just doing their job.  I instead felt like I was always having a great time with terrific people who were celebrating the joy with us.

“White Shark!”  Ah, I’d read those words from other reviews, but now I completely appreciate the chant.  Someone would always accent the phrase each time one of our friends would come to visit.  On day one of our dives, it took only minutes before we had visitors.  Surprisingly enough, not all were of the same species though.  You can’t know much about things you’ve never yet considered, so I was amazed at the level of interaction we saw between one of our first sharks and a sea lion.  We’ve all seen countless footage of Great Whites breaching upon one of these for lunch, but what an incredible sight it was to see prey almost toying with the massive predator.  For nearly 15 minutes, we watched a sea lion swim around and actually follow a great white.  Maybe it was taunting the shark (quite speedy one-on-one), or maybe it was hiding in it’s trail, but one thing was a constant; both were very aware yet surprisingly fine with each other in proximity.  I’m sure this is wrong, but, in some moments, the calmness of their interaction almost resembled playing.  Of course, I wondered if that would change if one got, erm, suddenly hungry.

By my first dive, I had already seen two different Great Whites – wonderful start!  Dive Master Martin joined our initial trio in the cage, and it was nice to see him just as excited as we were.  Though all of his efforts were devoted to providing us a great and safe time, I thought it was very special to see his obvious love for these creatures too.  These are the kind of people I wanted to be on tour with – those who deeply care about these amazing sharks. 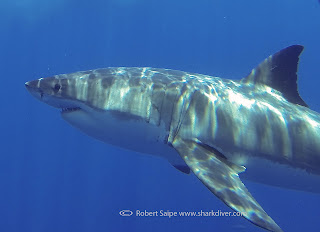 We had one-hour rotations, so it was never long before our next turn.  The weather was gorgeous, and the breaks were just enough to recharge, enjoy the sun, and get ready for the excitement again.  Perhaps we were lucky, but my cage team saw sharks from nice and close on absolutely all 5 dives that day.  Some stayed for hours, others just for minutes, but all showed their uniqueness.  I have always loved Great Whites, but, before this, I had never realized the impressive depth of their intelligence and personality.

By day two, my sleep patterns were fully adjusted, and I woke up feeling extra strong, definitely raring to go.  Of course, chef Mark’s hard work had something to do with that. I can’t tell you how nice it was to always have such wonderful food so we could always feel full, great and strong.  Every meal Mark and Carolyn served us on the journey was a 10.”

Some divers took breaks from their turns by day two which I think had a lot to do with the gorgeous weather and the fact that we’d already seen so much.  Around lunch, I skipped one rotation, however I did make up for that with an open spot later, so, again, I logged 5 one-hour dives.  This day was loaded with excitement.  Some of the previous day’s sharks returned, but we also saw several new ones, including Annika, the lone female we met on our trip.  I loved watching Chuggy, the battle-scarred but strong male as he entertained us with dozens of passes.  One unnamed Great White spent hours showing us his charisma.  Johnny, Reb, Diablo andAtlantis put quite a show on too.  I lost count of how many times these sharks came in for an ultra close look.  What wonderful, curious creatures they are.  It is an exceptionally profound experience to see a Great White so clearly in control of his domain yet totally willing to exchange a calm moment as you look each other in the eye.  Not once did I feel like they were looking at us to attack.  I had many chances to see their incredible power, but, at every moment, I felt like each instead looked at us more with curiosity, just like we had for them.  It was a wonderful time as, by day’s end, we’d identified a total of 7 Great Whites this day alone. 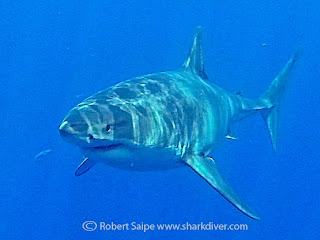 On day three, I awoke hoping to spend as much time in the water as I could.  I decided that, on all available dives, I would wait to see if anyone else wanted the open spots, but I would take them if no one else did.  Many did take breaks, so, in all, I was able to enjoy a whopping 7 dives that day.  The three I took in a row wore me down a bit, but, wow, they were fun!  These sharks revealed so much personality.  I find it almost disrespectful to say too much about individual experiences with them (after all, I don’t have their permission!), but let me say, “It really wouldn’t be possible to have closer interaction with Great Whites than I was given on this day.”  The eye-to-eye, close as imaginable interaction I had with one in particular will forever be more than just a memory for me; it’s a permanent celebration.  I will cherish the sense of joy and awe I felt from those moments forever.  Before this trip, I had never met anyone who had been lucky enough to have safely met but deeply interacted with a Great White.  What a blessing it is to be one of so few who has spent some time with them in a way where we were both completely safe and could share our curiosities.

On the very last dive, it was quiet for many minutes, but then two entertainers came for close-ups.  When the clang on our cage let us know it was time to go, I remember thinking, “How can I leave right now?  There’s a massive Great White swimming just a few feet in front of me.”  But then, I shared one last look and turned to the ladder with a smile.  After all, “What better final moment of the journey could I ask for!”

Thank you Shark Diver!  I’ve no doubt I’ll be back soon.  This journey with you was absolutely amazing!
Rob Saipe.

Thank you for your great report and pictures! We enjoyed introducing you to our amazing friends and welcome you to our Shark Diver family.


About Shark Diver. As a global leader in commercial shark diving and conservation initiatives Shark Diver has spent the past decade engaged for sharks around the world. Our blog highlights all aspects of both of these dynamic and shifting worlds. You can reach us directly at sharkoperations@gmail.com.
Posted by Shark Diver at 10:15 AM