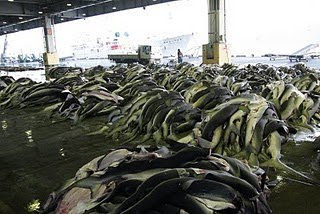 CNN covers Matt Rand from PEW explaining how the crises is unfolding:

"At one time, shark fin soup was considered a delicacy for the elite. But as Asia grows in population and wealth, the demand for shark fins has gone through the roof. According to the United Nations, shark fin imports to Hong Kong and Taiwan alone rose 214 percent from 1985 to 1998. This has had a disastrous impact on shark populations globally."

"A conservation watchdog accused a Brazilian company of illegally fishing 280,000 sharks which were killed to feed Asia's appetite for sharkfin.The Environmental Justice Institute, a Brazilian group, on Monday lodged a suit against seafood exporter Sigel do Brasil Comercio demanding $US800 million ($A883 million) in environmental damages."
Posted by Horizon Charters Guadalupe Cage Diving at 10:23 AM