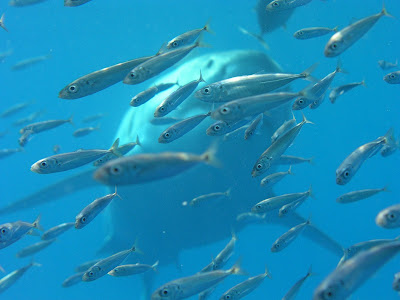 Here at Shark Diver we have a fan base that translates into return divers year after year, we call them "The Hard Core Shark Divers."

And none is more hard core than Jim Miller who penned this trip report for us at the start of the 2012 white shark season at Isla Guadalupe.

Thanks Jim, see you in a few weeks:

An open letter to potential shark divers from a two time shark diver (third trip coming up in September 2012).

When I landed back home in Boston with all the stories, pictures, and video, I asked myself, do I really need to go back? The answer comes quickly and easily. Absolutely, yes! I relive one of the most intense experiences of my life every night as I sleep, and I’ve done it twice! How many people can say that they’ve been close enough to touch a Great White Shark? That they’ve been in the water with one of the world’s most perfect predators? What possible reason could I have for going back?

I am not an adrenaline junkie nor do I have a death wish. Honestly, there are a lot of reasons. First and foremost is my new found love for the animal. I had an intense fear based on an experience from childhood. I wanted to beat it and it only took me 40 years to muster the courage. Being in such close proximity to these enormous, powerful, and graceful creatures is just unbelievable. There are no words to properly describe the experience. The only way to understand is to be there. You can watch Shark Week all you want, but frankly, it’s the difference between a riding a skateboard and driving a Lamborghini Diablo.

We all work hard and deserve to take time away from the chaos of daily existence.  I had been considering shark diving for several years, my fear getting the better of me every time. In 2010, I resolved to at least take the first steps to making the trip a reality. I decided to contact Patric Douglas, CEO of Shark Divers, with my concerns. Truthfully, I figured that being the CEO, he would either blow me off or just tell me what I wanted to hear in order to make the sale.

I could not have been more wrong.

During our first exchange, I spent approximately 45 minutes on the phone with this guy who I had never spoken with before. Within the first five minutes of the conversation, we were on a first name basis and it felt like I had known Patric for years. However, I am still a skeptic, and that mandates that I do my due diligence, salesmen be damned. My search turned up several stories from happy shark divers. My decision was made, but still, I decided that I would reserve judgment until the trip had concluded. My conclusion is that Patric Douglas is not a salesman. He is someone who cares deeply about the environment and the preservation of the wildlife that lives in it. The same can be said for the crew M/V Horizon.

When I first boarded the Horizon back in August 2010 for my first trip, I was treated like royalty, which is a bit much for me to take. Honestly, I was more than a little wound up and scared. In other words, I was as ready for this trip as I would ever be. Being from Boston means being a bit more intense, so when someone tried to take my luggage out my hands, I thought I was going to have to get mean. I just was not used to being treated so well! It wouldn’t have mattered much, because Mark would have kicked my butt anyway, just sayin’. I said to him, “I can carry my own luggage, buddy”. He responded with “this is your vacation”.

With that, it began and I let him have my suitcase. This brings me to Captain Spencer Salmon, who never ceases to crack me up. Captain Spencer is all business, but one would be hard pressed to see him being anything other than relaxed. He is a very unique character to say the least. Then there’s dive master Martin Graf, who briefs and instructs the divers on policy, procedures and dive safety. Martin provides a wealth of knowledge on Guadalupe White Sharks and all dive related information one would need to have a great trip. He knows the sharks by name and in some instances, does not need to be in the water to identify them. Martin is an important resource for the divers and a critical part of the Horizon crew. I can’t forget Captain Kyle, who I believe is a New York Giants fan… Can’t be perfect I guess, but still, another reason for me to be a repeat customer…  I just can’t say enough nice things about the crew. They are a huge part of the reason why I want to go back.

Oh, and did I mention Chef Mark? How could I possibly forget Mark?

Yet another reason for returning has to do with the people you will meet and the friends that you will make during this adventure. I’ve made some pretty good friends on both trips that I am still in touch with. In fact, I know of two people that I dove with last year who will be returning this year. On my 2011 trip, after a hard day of diving, I can remember sitting down with my friends, Julie, Sean, James, Jack, Pierre, and Janice and talking about the day’s adventure over cocktails.

If you are the type of person who has a hard time changing gears from work to vacation, you’ll be happy to know that it’s pretty easy to do on this trip. There is so much to take in, that it’s almost over-whelming. I can remember Captain Spencer cutting the engines on the way to Guadalupe and informing everyone over the P.A. system that there was a pod of Blue Whales just yards away from the ship. You almost expect a “Jurassic Park”-like experience.  You have to have your camera ready at all times. For example, during my first trip, we had a white shark perform a full breach, just feet away from the ship. No one saw that coming… And no one captured that on film, but I will remember it forever.

So with that said, I am 49 days away from my third trip with Sharkdiver.com and the MV Horizon to Isla Guadalupe and I am going crazy… The anticipation is tangible. I’ve watched the film I’ve taken from my previous trips countless times. There is nothing that I can do to appease the ache. I have an intense longing to be back in the water with Shredder, Bruce, and the rest of the Guadalupe White Sharks. As far as I am concerned, this is no longer just a vacation for me. I have found a cause that I love and can get behind in such a way that affords me the opportunity to actually have a positive impact. This is an opportunity to make a difference.

After this experience, you will have no choice but to talk about the adventure with people close to you about the plight of sharks as a species. Your words will travel. The act of you telling your stories will spread awareness. Not to mention that you will have the time of your life. So I’m carefully planning what gear I’ll be taking with me this year so that I can better communicate what I
experience.

Tonight, I’ll be dreaming of September 15th, 2012 and the start of another adventure that I will never forget.


About Shark Diver. As a global leader in commercial shark diving and conservation initiatives Shark Diver has spent the past decade engaged for sharks around the world. Our blog highlights all aspects of both of these dynamic and shifting worlds. You can reach us directly at sharkcrew@gmail.com.
Posted by Horizon Charters Guadalupe Cage Diving at 6:14 PM

Nice write-up, it gives a solid understanding of the experience and interesting perspective, thx.