Island of the Great White Shark-Harvard 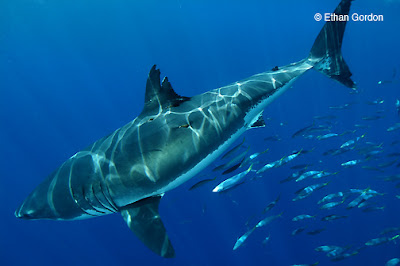 From Richard Theiss CEO of RTSea Productions this afternoon:

I'd like to think that it's because the documentary resonates with people other than die hard shark lovers. Hopefully the realistic portrait of white sharks, the ongoing research, and the conservation message presented in the film will reach as many people as possible, especially those people who are convinced that great white sharks are the Darth Vader of all sharks.

I will not be in attendance at the screening, but Dr. John Mandelman, resident shark expert from the New England Aquarium, is scheduled to be there for follow up questions and discussion about shark issues. Things couldn't be in better hands.

So, if you're in the Boston/Cambridge, MA area next Thursday, check it out.

We'll be there. This is an important doco and one that is sorely needed with sharks being killed worldwide!

I bought a copy of this movie from Amazon last week. One of the best white shark films in the past decade bar none. Well done RTSea!